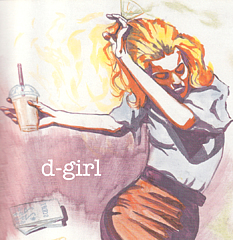 d-girl (n.) An industry term for someone who works in film development, finding projects suitable for television or feature film.

D-Girl Screenplay Coverage stands out from the rest with her many years of experience in Hollywood and a caring, highly professional approach to script coverage. The breadth of knowledge and services d-girl offers are sure to please even the most discerning writers.

When writing a screenplay, or a teleplay, for Hollywood, often writers get stuck at a certain point in their story. Or they don't know how to end their movie.  Or they aren't sure if their script is good enough to sell.  Why not have d-girl, an industry professional who has read thousands of scripts, brought projects into Hollywood studios that have been bought for hundreds of thousands of dollars, did coverage and notes on screenplays that have been made into Blockbuster Motion Pictures, write you professional script coverage on your project?  Get an unbiased, intelligent, thoughtful and constructive analysis of your screenplay or teleplay before you start submitting it to Agents and Producers.  In Hollywood, you typically only get one read: make your script the best it can be before showing it to anyone else!

D-girl started her Hollywood career as an assistant, and then worked her way up to executive level after writing script coverage on project after projects that were ultimately bought for sale as feature films.  She has written script coverage on television scripts and features for many years, and her script notes and screenplay coverage is some of the best you will come across.  She prides herself on thinking outside of the box, and is best at coming up with creative and thoughtful ideas designed to make your project ready for sale.  With a focus on structure, character development, theme, story, and overall concept, she will identify the strengths and weaknesses in your project in a helpful and kind manner.  D-Girl can also help Ghost Write your project, by laying out your movie idea in screenplay form, or she can constuct an Industy Standard film treatment based on your idea.  She can also assist in writing book proposals, and adapting your book into screenplay form.

Don't put those unsold screenplays in a drawer!!  Dust them off and send them to D-Girl!  Good ideas and good writing are huge commodities in Hollywood, and there is always a shortage of both.  D-Girl will make your project better.  Give it a try!